I Gave Up Consultancy to Run Cycling Holidays: Case Study 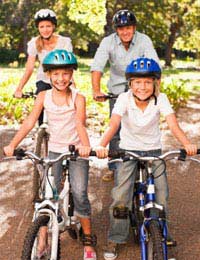 "It was all a bit of a shock really, one minute I thought things were just rolling along, you know, the way they do, then suddenly everything, all at once, completely changed."

That's the way the interview with Dan Trodden (not his real name) about his career change started the other day. He was, in his own words, "a moderately successful consultant", although most people wouldn't see it as moderate success. One year the profits from his technical management consultancy paid for a £30,000 extension to the house in Buckinghamshire, the next year they bought him a Jaguar XK8!

"It wasn't new," he protests, "but the extension was really the wife's idea, so I thought I could buy something for me. And she enjoyed it, too. Until the money started to dry up."

We're talking about 2002 here, some time after the bursting of the technology bubble, and Dan felt that he'd done well to keep going as long as he had. But when his main client lost their main customer, it finally ground to a halt.

"I've never worried about money," said Dan, "I always assume I'll be alright, but the wife didn’t have that confidence. It was the first time I'd been properly out of work since I'd met her, but I was relaxed about it. Being a contractor or a consultant you're always out of a job every now and then, in fact, that's when you catch up on all the things you haven't been able to do. I knew we had enough money to tide us over, and there were little bits of work here and there."

Money Can't Paper Over Everything

But two things were coming together. Dan had already begun to be disenchanted with his work, and then he realised the money was papering over the cracks in his relationship as well.

"I'd stopped flying about a year before this," said Dan, "I'm six foot three and I'd had enough of being shuttled to and fro for work and holidays – California, Sydney, Hong Kong, that sort of thing. So I stopped. I told the wife no more long-haul holidays, told my customers everything would be done by email, phone and video conference."

"The other thing was that my work was always patching things up between technology people and the ones that ran the businesses, sort of geek-suit liaison. You have to watch yourself all the time, choose every word carefully, and I was getting tired of that. But I didn’t realise how much it had been getting to me until the work stopped."

Dan isn’t so forthcoming about his relationship. He only makes the points that there was counselling and he didn’t give up on the relationship until he'd put over a year into trying to save it, it was clear things were irrecoverable.

"So then I realised I was free. I was still in the house, still bloody paying for it, actually, but I could go anywhere. I then realised I didn’t have to do the same job either, it could be a new start."

"I remember thinking that I could use my Project Management skills to help me with this career change," Dan said, "so I sat down with a clean sheet of paper, quite literally, a piece of white A4. I started to write down the things I enjoyed doing, the things I thought I might enjoy, and the things that I used to like doing but didn't do any more, largely because of the wife!"

"Out of all the things I wrote down, the three that jumped out at me were languages, cycling and writing. I'd done French and German at school but been stopped from taking them at university. Cycling I'd kind of always done apart from the past few years. So I put those together and started looking for work, mostly using the internet."

Seasonal Work Can Be Tricky

It was a steep learning curve. In the end the search narrowed down to helping English tourists in France, preferably with cycling tours involved.

"Finding out about the seasonal nature of the work was a killer," Dan said, "because I started the search in April and that was too late for the summer. But by now I was in too deep. I found a six month IT management contract to keep me going and was able to plan for the following spring."

Dan ended up with Headwater Holidays that run walking and cycling holidays around the world. In France (and many other countries) there is a rep on hand who cleans and maintains the bicycles, liaises with hoteliers and takes the clients' luggage from hotel to hotel for them, so that they are only walking or cycling with a few bits and pieces.

Sun But No Sea, Sand or Sex!

"I was in the Creuse, bang slap in the middle of France, more cows than humans," said Dan, "warm but not too hot, a bit like England of 50 years ago, they told me, even red squirrels. Very rural, not many English speakers, so I got to exercise my French a lot and the French were very patient with me! The money's not great but either side of the English summer holidays you get a lot of time to yourself."

"Friends had a bit of trouble getting it so I used to describe it by asking them if they've seen those TV reality programmes about the reps in the Mediterranean resorts, all sun, sea, sand and sex? Yeah? Well, I tell them it's like that but without the sea, sand and sex!"

"Ah, well you'll have to wait and see for that," said Dan, with a broad smile.

Changing careers can give you the opportunity to learn of qualities that you never knew you had. Find out about one reader's self-discovery in our article What I Learned About Myself from a Career Change.