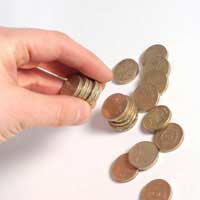 Thinking about a career change is a popular daydream, but for many people the cost and the hassle is enough to put them off turning their dream into a reality.

Doug Martell, 29, from Chelmsford, had been one of those people, but a chance remark from a friend made him realise that he could change career if he made a few changes in his life. He told us, “I’d worked in advertising sales since I left university and was on a great salary and had loads of perks. I worked with a great team of people, but one day it dawned on me that I was the oldest person there as everyone else had used advertising sales as a stepping stone to something bigger and better.”

He continued, “I’d always wanted to put my skills with people and words to greater use than selling advertising space and I’d fantasised about actually working in an advertising agency. But I knew that I didn’t have the right experience unless I was prepared to go in at the very bottom, which I couldn’t really afford to do.”

Paying for an Evening Class

Discussing this with a friend one evening, the topic of taking a professional Evening Class in advertising and PR while still working full-time came up as a way to enter at a higher level, but Doug said that he could not afford the course as it was rather expensive. When his friend mentioned that he could afford it if he sold his beloved motorbike and matching leathers, Doug dismissed the idea as it was his pride and joy!

Doug added, “It got me thinking, though. I’d got so used to spending my salary that I didn’t consider how much better my career prospects would be if I took a step back and thought more strategically. After more thought, I put my motorbike and the leathers on eBay to pay for the course, although I did make sure I put a high reserve on to make sure I got a decent amount for them!”

After the sale, Doug signed up for the course and was more than pleased to realise that his career prospects would be far rosier once it was completed.

He concluded, “Working in advertising sales is great when you’ve just graduated, but I hadn’t really considered what I’d do in the longer term. Doing the course enabled me to readdress my skills and target them towards working in advertising, and I have to say it’s the best thing I’ve ever done. I did have to take a salary hit for a couple of years, but now my career trajectory is going far higher far quicker than it ever could have before.”

How To Fund a Career Change

Are you being held back from changing careers by your finances? Read our article Where To Get Help With A Career Change to discover how you can afford to make your dream a reality.