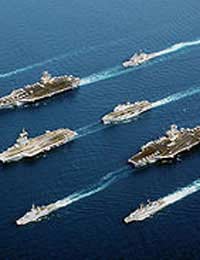 The military is defined as an organisation that is authorised by its country to use force, including weapons if necessary, to defend the country. Thus, the military refers to organisations including the Royal Air Force (RAF), the Royal Navy and the Army, which now encompasses the Territorial Army, too.

As military organisations are often ‘societies within societies’, virtually any job that is found in ‘real life’ is found in these fields. There are six core types of job available in the military, each of which require the passing of an entrance exam (the strictness of which depends on the type of role), a health and fitness test (again, the level of health and fitness required depends on the nature of the job) and a certain level of time commitment, ranging from six months to 12 years, depending on the cost of relevant training.

All military operations have active combat roles. As a rule, these positions tend to demand the highest level of health and fitness, although that is not a blanket rule with, for example, the 20/20 vision demand no longer in place.

There are a wide variety of Engineering Roles in each of the military services as the equipment, machinery and tools use need to be kept in good working order at all times. Consequently, engineers on all levels are required, including those for repairing, servicing and maintaining military vehicles and armourers to inspect and repair weaponry.

This is where a great deal of ‘civilian’ type roles comes into play, with the military needing all sorts of people to fulfil positions such as Recruitment, payroll and human resources. The type of experience required for these positions is largely the same as for comparative roles in the private sector, but with the added health and fitness tests in case of deployment. There is also usually greater security and potential career development in these roles in the military than in the private sector, with greater opportunity for travel and personal development training.

Intelligence, IT and Communications

There are thousands of jobs in the intelligence, IT and communications sector of the military, particularly graduate jobs that offer the potential to quickly be promoted through the military’s ranks.

Intelligence jobs offer great potential for graduates with an analytical mind, so economics, maths and politics graduates are especially in demand, although other subjects are welcomes. IT specialists are needed are the military bases in the UK and the overseas bases and missions, so there is a great chance for travel, although often to difficult geographical areas. Communications roles encompass the ‘PR’ side of the military as well as internal communications.

There are medical positions available on all levels across the military, so Nurses, doctors and surgeons are all required. Many medical graduates join the military straight from university, although placements for experienced medical professionals are also in demand.

Music and ceremony is a huge part of the military tradition – think of the mounted cavalry and the marching bands – so musical skills are greatly valued. Many scholarships are available for those with musical ability to join the military.

When is the best time to join the military? Some recommend enrolling as a school leaver, while others prefer to get some life skills experience and sign up after attending university. The pros and cons are discussed in our article Join The Military Before Or After University?
You might also like...

Join the Military Before or After University?