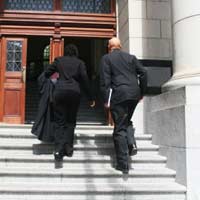 It would be fair to see that obtaining pupillage is the bane of a trainee barrister's life.

With very few exceptions the only way to qualify as a barrister is to complete a formal, twelve-month pupillage - effectively a period of apprenticeship. The first six months is spent following a practising barrister who acts as the trainee’s pupil supervisor whilst carrying out their own work. During the second six months the trainee barrister is permitted to start conducting their own cases.

Getting a place on the Bar Professional Training Course (BPTC) may be relatively easy for those with the necessary academic qualifications and ability. Finding a pupillage is another matter altogether.

The first problem is due to the numbers involved. Although in recent years the number of places available on the BPTC has increased, there is no correlation with the number of pupillages available. For example, it was estimated that in the year 2009/10 1793 students enrolled on the BPTC and 1432 completed it. However, for the year beginning 2010 only 502 pupillages were advertised. For 2011 that number went up to 545, but only 462 pupillages were advertised for 2012. Bar Council statistics show that for the year 2010/11 there were 2865 applicants for pupillage.

It immediately becomes apparent that successful completion of the BPTC does not guarantee a career as a barrister. The figures become even more depressing when it is remembered that many would-be barristers re-apply for pupillage year after year until they finally get one - or give up and look for a "normal" job.

Why there are So Few Pupillages

Most barristers are self-employed; therefore, the financial "award" which must be paid to pupil barristers comes straight out of the pocket of other barristers. Until 2003 there was no requirement to pay pupils and many trainee barristers struggled through their first six months of pupillage on student loans. Even then the numbers were limited but at least barristers had little to lose by agreeing to take on a pupil. (In fact, historically, pupils paid their pupil masters for the privilege of following them around the courts.)

In addition, the number of places at the Bar is limited - there is no point having thousands of pupils if there is no work for them to do. The situation has deteriorated as solicitors have secured the right to conduct much litigation which was previously the monopoly of barristers.

How to Get Pupillage

Trainee barristers may improve their chance of getting pupillage in a number of ways.

The first is to undertake as many periods of relevant work experience as possible. In particular this should be work experience in barristers' chambers – known as a “mini-pupillage”. This may involve spending a week or two following barristers at work. Letters may be sent to chambers, enclosing a CV, asking to undertake a mini-pupillage. There is a popular belief that there is a direct relationship between the number of mini-pupillages undertaken and the likelihood of securing pupillage.

Secondly, would-be pupils need a good undergraduate degree. Those aspiring to a career at the Bar really must aim to get at least a 2.1 in their undergraduate degree. Pupillage committees sifting through hundreds of applications may immediately discard those with a 2.2 or lower. The statistics produced by the Bar Council bear this out – for the year 2009/10 23.5% of pupil barristers had a first-class undergraduate degree, 52.8% had a 2.1 and only 8.5% had a 2.2. (Two pupils in that year were bold exceptions to the rule with only a third-class degree.) Those applicants who do not have at least a 2.1 in their undergraduate degree are going to need some pretty impressive qualifications and / or extenuating circumstances to put on their pupillage application form.

Thirdly, care should be taken to apply to the “right” chambers. Pupillage applications can be a bit of a lottery but it is vital to choose carefully when picking which chambers to apply to. As with any job, there is no excuse in the age of the internet for not doing proper research into the target of your application. Laying the foundations for a successful pupillage application could include doing mini-pupillages at chambers that do the type of work which the trainee barrister hopes to pursue.

Any notion that a trainee barrister has "arrived" by starting pupillage will soon be dispelled the first time they are asked to make tea for a meeting or to photocopy multiple lever-arch file trial bundles. The silver lining is that most applicants who manage to secure a pupillage will go on to successfully complete it. (The bad news is that completing pupillage is no guarantee of being taken on as a tenant by your chambers.)
Next Page

A Career in Forensics